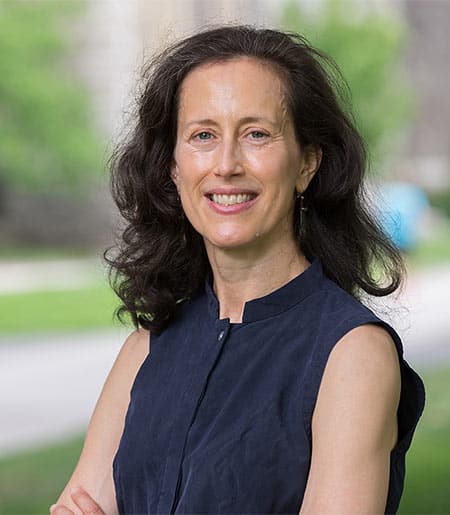 TJ Hinrichs is a historian of Song era (960-1279 c.e.) Chinese medical, political, and cultural history. Her forthcoming monograph, Shamans, Witchcraft, and Quarantine: The Medical Transformation of Governance and Southern Customs in Mid-Imperial China (Harvard East Asia Series), examines how the Song dynastic government made medicine an instrument of social reforms, and the ramifications of those policies for political and medical practice, knowledge, and authority. Other recent projects include exploration of the recently discovered tomb of an eleventh century Shaanxi pharmaceuticals merchant, and Song-Yuan (10th-14th century Chinese) commercial and itinerant cultures. With Linda Barnes (Boston University) she co-edited the volume Chinese Medicine and Healing: An Illustrated History (Belknap/Harvard, 2013), which brings together contributions from fifty-eight leading scholars from around the world.

A central thread running through both her research and teaching is the investigation of connections between intimate experiences such as illness and personal transformation; communal practices such as medical training and religious rites; and broader historical shifts such as the consolidation of the civil service examination system, commercialization, urbanization, and the spread of printing. Her courses explore China’s history from its classical to its modern periods (“Medicine and Healing in China”), sometimes concentrating on the imperial era (“Imperial China,” “Vitality and Power in China”), early and medieval periods (“China’s Classical Age” [FWS], “Daoist Traditions”), or the late imperial period (“Popular Culture in China,” “Society and Religion in China,” “China’s Early Modern”), and sometimes looking at China and Japan in comparative perspective (“East Asian Martial Arts”).

With Professor Suyoung Son (Asian Studies) she co-organizes the Cornell Classical Chinese Colloquium (CCCC), a reading group for scholars interested in Chinese studies. At each session a volunteer presents a text in classical Chinese. Attendees discuss historical, literary, linguistic, and all other aspects of the text, and work together to resolve difficulties in comprehension and translation. Presentations include works of all sorts, from the earliest times to the twentieth century. All are welcome, at any level of experience with classical Chinese. No preparation is necessary for non-presenting participants, and texts are distributed at the meeting. We usually meet on Fridays from 3:30 until around 5:30. You can find announcements for CCCC on the East Asia Program web site. Email for more information, or to receive email announcements.